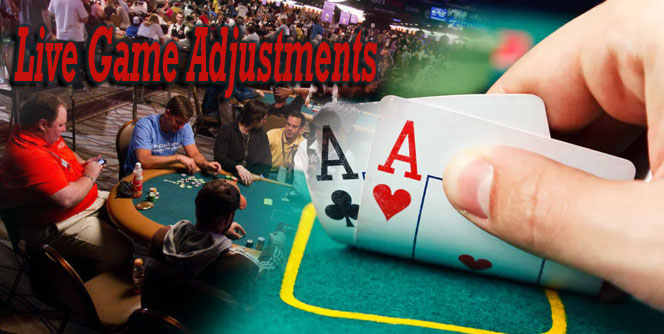 By Ivan Potocki at December 19, 2018 5:51 pm
5 Minute Read
To get one thing out of the way right at the start, I’m never advocating playing poker with no regards for math. The result of such an approach would be dubious at best. However, the main idea behind this blog’s title is to get the point across that, sometimes, especially in live games, you might need to do things that wouldn’t be considered right from the purely mathematical standpoint. Poker is a very versatile game and there are many aspects you need to consider every time you sit down to play. Math and numbers are the fundamentals that a player just can’t expect to win without. However, in certain situations, it is worth going the other way and doing things that are technically “wrong” but are the right fit for the given situation.

Those who play online poker know that, once you get to any sort of respectable stakes, most players will be playing by certain rules. While things do change slightly from one player to another, most regulars stick to certain patterns when it comes to raise sizing, types of hands they get involved with, etc. Overall, online games are quite consistent and taking advantage of other players can be quite an ordeal.

Poker skills, knowledge, and ideas of people sitting at a live poker table vary so greatly that in most live games, you have no idea what to expect until the fireworks start. Raises before the flop will be all over the place, you might have people 3-betting almost every hand they get involved with, and in terms of hand selection, good luck trying to guess what somebody decided was good enough to see the flop with. Don’t get me wrong – it is still poker and good players will prevail, but certain adjustments are required if you want to make most profit possible. This isn’t to say that a strictly math-based approach won’t be profitable. But, if you get out of your comfort zone and start looking for other opportunities, there are plenty to be had in live games.

Sizing up the Table (What You Can Get Away With)

If you come from an online poker background, you probably know about how to pick and choose your hands preflop based on what you can expect other players at the table will do. In a live game, however, you’ll often have some freedom to adjust your starting hand ranges. The first thing to do is to sit down and size up the table and get a general feel for how the game is playing. Are there many aggressive players around or is everyone happy to limp along or call small raises and see flops? Of course, nothing is 100% at the table, but you can usually go with this general feel and adjust accordingly.

When you’re playing on a passive table where you can expect that blinds and/or dealer will 3-bet only the very top of their range, you can afford to take many more flops. If you’re a good post-flop player, you’ll be able to win many pots where nobody connects, so there is every reason to widen your late position range and start including some speculative hands. What I mean here is that, usually, you won’t be thrilled to call earlier position raises with hands like suited connectors because often, somebody will come in with a 3-bet shutting you down. When this isn’t the case and you can actually expect to take your good equity hand to the flop while not having to invest too much, this becomes a +EV proposition. As mentioned, not only will you hit fairly often, but many times you’ll be able to win pots that don’t belong to you whatsoever. This changes if people are coming in for big raises, which creates a different type of situation, which I’ll also try to cover. But, as long as raise sizes are reasonable (3x to 4x) and the table is passive, a good player should take quite a few flops and then proceed from there on.

In online games these days, a large majority of players is there to make money. As disappointing as that may be for some, that’s just the fact. Live games are a completely different pair of shoes, though, as they attract people who come there to have fun, drink few beers, and, if they’re lucky, win some money. The point I’m making is – they aren’t there to fold. Or at least most of them aren’t. That’s why it might be a good idea to tame your continuation betting frequency unless you’ve ran into a table full of live nits. An average poker game at the stake level of $1/$2 or $2/$5, however, usually won’t have such a structure. Types of hands people chase when playing live poker can be really mind-boggling if you’re new to the live scene. Backdoor gutshot draws, three card 6-high flush draws, you name it. So, to make your continuation betting more effective, you need to make it more calculated. While you won’t have access to numbers and stats when playing live, it isn’t too hard to categorize live players fairly quickly. It usually takes few orbits to figure out who’s playing what style and these initial observations rarely change. So, if you see someone is a calling station and reluctant to fold, there is absolutely no need to try and bluff them. Simply take them to value town when you have a good hand.

Balancing Your Range? Forget About It!

I’m sure there are live games out there populated with good players who keep an eye out on every move you make. I’m also fairly convinced they aren’t the ones reading this blog. In your average live game, people are more concerned about what’s on TV and who’s winning in tonight’s derby than trying to define your range. Which means that balancing the said range becomes almost unnecessary. You really don’t need to balance the number of your value bets with your bluffs. Even if you played only value hands, it would take a long time for people to figure it out. Of course, if you play against same players very often, you will need to create an illusion of balance. What I mean by this is that you’ll need to have some “surprise” hands in your range if only to make them think that you’re capable of playing some hands other than premium holdings. If you’re pegged as someone who only plays when they have the nuts, it might be hard to get action. But if you show up with few bluffs and few speculative hands here and there, that’s all the balancing you’ll ever need in most lower stakes live games.

When Their Math Is Off

While you may adjust your game slightly and deviate from what would be mathematically sound here and there, other people at the table are often prone to committing serious math mistakes. What I mean is they’ll often make 10x or even bigger preflop raises, you’ll often see double and triple straddles, creating pots with heaps of dead money. Now there are two things to keep in mind here: In these spots, it’s the other players who are making an error of judgment and you should be the one to punish it. Don’t be afraid to make big raises or even move in (if you have <100 big blinds) in these spots with a fairly wide range of hands. It is hard to construct the exact range of holdings you should do it with because it will depend on how light you expect to get called but you should always keep the possibility at the back of your mind. Once there are 30 or even more blinds in the pot before the flop and it’s all dead money (straddles, limps, etc.), it is almost impossible go wrong when you move in or make a committing raise. There is just so much money in the middle that unless you get the worst case scenario (running into an over-pair with two under-cards), you’ll actually be in a +EV spot.

Conclusion: Take Your Value Where You Can Get It

Poker is all about making as much money as possible in every single spot. While tournaments might have other considerations, cash games focus solely on making as many chips as you can because every chip you get can be exchanged at its exact dollar value. So, when you’re playing in a live game, where people are prone to making really serious mistakes and plays you just don’t expect to see, you need to be able to leave the mind-frame of math-only and adjust accordingly. Making these adjustments will help you win more money in the long run. Of course, as always, you need to be able to question your plays after a session and see if there is room for improvement. While some adjustments are great, some others can actually be –EV in a certain setup. Be open to analyzing your game, fixing your mistakes, and readjusting as required. By doing this over and over again, you’ll constantly improve and so will your live poker results!