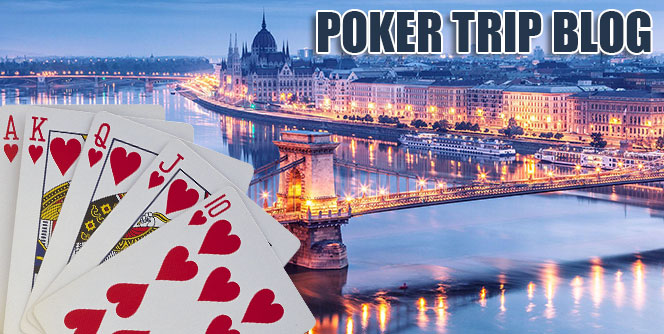 By Ivan Potocki at November 16, 2018 9:43 pm
7 Minute Read
Playing poker is one of my favorite hobbies. Ever since I learned the game of Texas Hold’em some ten years ago, I’ve fallen in love with it and even made living playing poker for a couple of years. And, although I’ve moved on to other things since, poker still remains the number one thing I love doing in my spare time. And, while many people enjoy playing online, these days I prefer live poker – tournaments and cash games alike. It may be the same game but playing in a live setting just gives me much more pleasure and actually being able to see your opponents can be of huge importance. Unfortunately, where I live, the poker scene is quite weak so I don’t get to play nearly as much as I’d like. So, being able to take a short trip to Budapest the last weekend and spending some time at the tables there was a really memorable experience – one I hope to share with you in this blog alongside some information if you happen to have similar affinities and your bankrolls isn’t huge.

Plenty of Action at Reasonable Stakes

In Budapest, the poker room is situated at Duna Plaza, on the first floor of a large shopping mall. It may be a strange place for a poker room and I was surprised on my first visit (this was my second trip), but they made it work very well. Apart from being conveniently located, Duna Poker Center is also just a poker room – there are no slots or table games, so you can fully focus on playing poker with no distractions. Before I move on to what really matters, let’s just get the matter of currency out of the way. In Hungary, Hungarian Forint (HUF) is the official currency and it converts at around 1000 HUF for €3. This isn’t the exact conversion rate but it is close enough to get a good feeling for the kind of stakes on offer.

If you’re looking to play cash games and not risk too much money, Budapest is an excellent place to be in. At Duna, you’ll find cash games running at 50/100 and 100/200 HUF – so you can buy 100 big blinds for around €30 or €60. If you’re interested in playing higher than this, there are occasional 500/500 tables running, although mostly playing Pot Limit Omaha. Now, this may seem low to people from Western Europe, but when compared to the standard of living and prices in Budapest, these are actually reasonable stakes. And, that’s probably why there are at least four or five tables running every single night. On weekends, there is ten or more tables running and if you come in late, you’ll probably have to wait for a seat.

If you’re a tournament player, there is also a lot of tournament action throughout the week. There is at least one event running every day and, on most days, there are two tournaments: one starting around 4:00 PM and the other one kicking off around 7:00 PM. Although the schedule changes from time to time, these days the biggest weekly event takes place on Fridays, with the buy in of 38,000 HUF and the guarantee of 3,000,000. If you play in this one, you’ll also get a complementary dinner. There are many more tournaments throughout the week, nearly all of them with guaranteed prize pools between 500,000 and 2,000,000 HUF, which shows the room is confident there’ll be enough players every time. Buy-ins range from 8,500 HUF to 20,000 HUF, so there is something for everyone. The tournament room is completely separated from the cash game hall (across the corridor), so cash games and tournaments run at the same time. If you bust out, you can just take a short walk and find a seat in one of the cash games.

Quality of Play: Money up for the Taking

From what I could see during my time on both visits, there aren’t too many good players at cash tables or in tournaments. Most people you’ll meet at the tables belong to the group of recreational players who are there to have fun. So, if you’re good at poker, there is definitely money to be made.

The size of blinds doesn’t really tell the full story of cash games at Duna. Although blinds are nominally 50/100 or 100/200, Hungarians seem to love their Mississippi (button) straddles and as soon as the game heats up, these become a regular occurrence. Often, you’ll see people placing the button straddle of 1000 HUF+ and a few people calling with weak or marginal hands, so playing even basic TAG poker you should be able to get yourself in some great spots. To illustrate this, I was able to scoop a 80,000 HUF pot playing 50/100 going all in against three players before the flop with pocket Queens. One of them showed up with 7-2 and he had no problems putting 20,000 on the line with this hand. Of course, in a game like this, variance can be a bit brutal if you’re running bad because you’ll have to get a 100 big-blind stack in with a solid hand. If you get sucked out on or coolered in a few hands, you can quickly get stuck for five or six buy-ins. This is nothing to worry about, though, as you can get it all back in one hand.

When it comes to tournament play, the action is really soft and a decent player should do really well in these in the long run. In general, during early levels, people will be eager to see flops and you can make really big raises with your strong hands and expect to get called. As long as blinds are small, there is a lot of action. Later on, when every pot becomes important and you start getting closer to the money, everyone tends to really nit up, so you can steal relentlessly. Unless you run into monster hands preflop, you can get away with the murder.

Rake Isn’t Your Friend in Budapest

The only thing I wasn’t particularly happy about was the rake in cash games. Actual rake numbers aren’t made official anywhere and the dealers have small cards in front of them to help them determine how much rake they should take from a pot according to its size. While I can’t give you an exact figure, I did see four thousand or more taken out of an under 50k pot, so it seems to be around 10%. This isn’t that bad for a live cash game, especially at low stakes, but there seems to be no cap or, if It exists, it is so big that it is practically irrelevant.

Food, Drinks & Other Things of Interest

In many casinos, poker players are treated to free drinks and sometimes even to free meals depending on how much they play. You won’t get any of that in Duna and you’ll have to pay for everything you get. Prices aren’t bad, though, so you’ll be able to get an espresso for around 300 HUF, a bottle of coke or a beer for around 500 HUF, etc. Using chips in front of you to pay and tip the waitresses is perfectly acceptable and everyone’s doing it. This isn’t to say you should do it because you never want to decrease your stack size in a game where you feel you’re a favorite, but just don’t be surprised if you see it. It is a common practice there. When it comes to smoking, it is forbidden inside the poker room, so you’ll have to step outside for a cigarette break. Although I’m a fairly heavy smoker, I actually approve of this practice because having dozens of people smoking inside simply can’t be good for the games.

Apart from rake, a small amount is taken out of every pot towards the bad beat jackpot. The jackpot accumulates over time until it is eventually awarded. The rules for winning the bad beat jackpot change as the amount gets higher, so if there is no jackpot winner for a long time, it might get to a point where losing with Aces’ full to another Aces’ full is enough to trigger it. I actually witnessed a bad beat jackpot hand on my first visit but, unfortunately, I wasn’t seated at the table. Otherwise, I’d get my fair share as well, as a part of it is distributed to everyone who is dealt into the hand.

Another thing that you might have problems with in Budapest in general and inside the poker room in particular is the language. Most people don’t speak English at all and even those in charge of the room are far from being fluent. So, if you need to ask a question or get some information, it can be an uphill struggle. Also, it seems perfectly acceptable for two people to speak in Hungarian to each other while you’re involved in a pot with them, which hardly seems fair as there is no way to understand a single word they’re saying. However, these are local rules and you just go with the flow. As with most places, majority of players aren’t looking to cheat you and are just oblivious of the fact you don’t understand what they’re saying.

All in all, Budapest seems to be one of the best places in Europe where you can play many hours of live poker without having a big bankroll. Additionally, everything else is fairly cheap, so you won’t have to spend that much on food or accommodation. Taxi is also fairly cheap when compared to most European countries. Rake is definitely somewhat high for my liking and if you were going to play here for a living this would definitely be something to consider. For a short poker trip, however, this isn’t that relevant and you shouldn’t worry about it that much. Additionally, if you want to pay lower rake, you should stick to 100/200 games. I’ve definitely enjoyed my time there so I can only recommend it to others. If you love playing live poker and want a place that offers plenty of action and more than reasonable stakes, just go to Budapest. You won’t regret it, guaranteed!