Celebrities Who Have Been Banned From Casinos 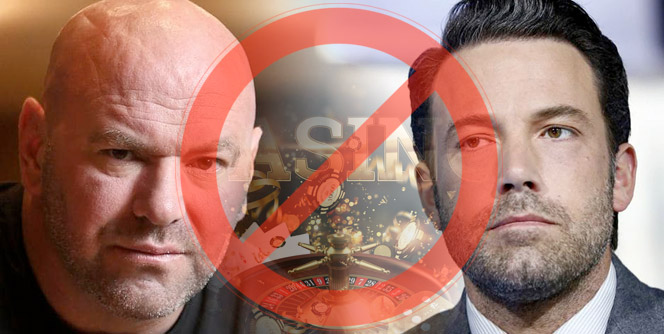 Most of us would love to run into a Hollywood A-lister, sports superstar, business tycoon, or world-famous singer while out at the casino for the evening. We’d probably find it even more entertaining if we saw them getting booted out of the casino.

Believe it or not, there are plenty of celebs who have been removed from and even banned from real-world casinos. We’ve rounded up several of these stories for your entertainment.

Ben Affleck has played more than one role in which he had above-average math abilities. The Accountant is one example. But did you know he has real math abilities in real life?

The Hard Rock Casino in Las Vegas removed Affleck for counting cards at the blackjack tables. Witnesses said that the casino staff were extra polite and asked the Hollywood star to leave. They didn’t have him physically escorted out, and they didn’t ban him, either. One rule for the rich and one rule for us, eh?!

After doing some digging, we found out that this isn’t the first casino that has banned Affleck from the blackjack tables. The actor confirmed this to the press in the past.

Affleck has also played in several underground poker games, and he won the California State Poker Championship in 2004.

If you’re a casino owner, you probably don’t want a world-renowned mentalist renowned for hypnosis and the power of suggestion anywhere near your dealers.

Brown is banned from lots of racetracks and casinos around the world, but the Broadway Plaza Casino in Birmingham specifically asked him to leave in 2010. He hadn’t even started playing when the management pulled the plug. Why so? Because they had seen his TV special in which he demonstrated scary card-counting abilities.

Brown confirmed the rumor of his removal on Twitter. “They were very nice, served me food, but wouldn’t let me play,” he confirmed.

To be fair to the casino managers, a guy with shows called Mind Control and Trick of the Mind is not the ideal player.

Paris Hilton is renowned for embarrassing incidents, but there’s probably nothing more embarrassing than getting barred from a casino that your family owns, especially when your beloved grandfather makes the call.

Paris’ grandfather banned her from the casino at the Las Vegas Hilton after she lost her Bentley in a high-stakes poker game. To add insult to injury, he also signed her inheritance over to a charity.

This may seem funny, but it’s not. Hilton opened up and admitted that she was “obsessed with poker” for a time. She was later banned from the Wynn Las Vegas due to a drug-related incident. After reaching into her bag while speaking to a police officer, a bag of cocaine fell out of it. We told you she is renowned for embarrassing moments!

UFC boss Dana White has done plenty for Las Vegas by bringing tens of thousands of people into jam-packed stadiums, many of whom pour into the casinos on the strip after an event. You could say it was a little cheeky of The Palms to ban him, but they did so in 2012.

Why so? Because White is so good at blackjack and plays for such astronomical amounts of money, that the casino decided they couldn’t take the risk of hosting him anymore.

How much is too much? $25,000 per hand with an above-average win rate. The tipping point was when he took the house for several million dollars on a night at the tables. The casino halved his credit limit and placed a $5,000 bet limit on the fight boss, who responded by hosting no further UFC events at the casino.

A couple of years later, The Palms wooed White with a $5,000 bottle of wine and welcomed him back. However, they soon fell out again when he won $5 million in a single blackjack session. The casino management was so angry that they refused to give him a bag or case to put his winnings in. Needless to say, White doesn’t play at The Palms anymore.

Rappers and criminal records seem to go together like cheese and pizza. Lil Wayne has been in the game since he was nine, so it’s no surprise that he has a rap sheet.

The rapper is banned from the Wynn Las Vegas for “undisclosed reasons.” Speculation is that he was drinking in the casino when the terms of his probation prohibited him from doing so. On the night he was asked to leave, he missed the Drake after-party as a result. Lil Wayne has been seen at several other Las Vegas casinos since Wynn banned him.

You’re never too big to get booted from a Las Vegas Casino. If they can remove Ben Affleck or Lil Wayne, you best believe they can remove the rest of us. Always follow the house rules, be polite to staff, and don’t try to card count. You will eventually get caught.