BetEagle: A Story of Sports Betting, Mafia, and Jail 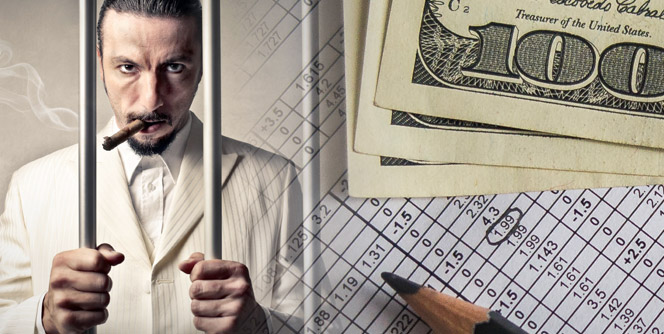 BetEagle was an online sportsbook that served gamblers during the turn of the century, just as online sports betting was taking off. Instead of becoming one of the industry’s big players – as many rivals did during that time – BetEagle has faded into history. However, the tale of BetEagle goes beyond simple business failings and instead plays like a crime movie, complete with mafia links and betting scams.

In this article we will walk you through the incredible story of BetEagle and how it’s owner, Joseph Graziano, eventually found himself in jail. Like all good crime stories, there’s a definitive timeline to this tale, so let’s go through it step-by-step.

2009: BetEagle was a fairly popular online sportsbook and casino that for many players seemed like a legitimate gambling venue. Little did punters know there was something foul under the surface. In fact, it is debatable whether BetEagle was ever legally operated. What is not in doubt is that BetEagle at some point became a racket for an organized crime ring.

Red flags were raised in 2009 when two players filed disputes, claiming thousands of dollars were stolen by rogue betting agents. Before the advent of the internet betting age, agents were simply called bookmakers, or bookies. Either way, BetEagle claimed it did not manage agents and would not reimburse players.

Worse, the agent was allowed to continue operating on the platform. In another twist, BetEagle announced it would no longer take deposits from new players. In other words, the website knew the heat was on and the game was over.

2011: Fast forward to 2011 and the walls were closing in on BetEagle and Graziano. To invade authorities and investigations that seemed certain to happen, the company changed its domain. Ditching the .com domain, the company adopted .ag.

2012: That domain change kept authorities off the BetEagle doorstep, but only for a few months. By 2012, investigators were closing in. BetEagle was accused of working with a member of the Genovese organized crime family and 12 members of the LaScala Crew. Online sportsbooks and mafia connections, there’s a movie in there somewhere.

U.S. Attorney Paul J. Fishman filed charges against the group for engaging in an illegal online gambling scheme. Each of the thirteen defendants were arrested and charged with racketeering conspiracy. Another fourteenth member was believed to be involved and was charged with transmission of wagering information.

Amongst the group of defendants were representatives of BetEagle, including its owner Joseph Graziano. Each was accused of using the website to conduct illegal sports betting operations in New Jersey. Members of the organized crime family would act as agents for an illegal betting ring that was available on BetEagle.

2014: Two years later, prosecution had a case against the defendants. Graziano joined four others in pleading guilty at a Newark federal court. He admitted to running an illegal online sports betting operation linked to the Genovese crime family. Alongside his employee Dominick Barone, Graziano pled guilty to racketeering conspiracy. He was ordered to pay $1.1 million to the court.

2015: A year later, Joseph Graziano was sentenced to 18 months in prison for his part in the crime.

You may be wondering what Graziano and his co-defendants did to get heat from the Feds. For the average sports betting punter, Beteagle.com looked like a regular sportsbook and seemingly acted like one. However, behind the scenes it was more like a classic mafia bookmaking scam.

The bookies (“agents”) would work on the site, but no money was exchanged on BetEagle. Instead, any winnings or losses would be conducted in person. Fine, perhaps, if you win… not so fine if you lose. When gamblers couldn’t pay their losses, the crime family would resort to threatening tactics. It was a classic mob play, albeit through the wonders of technology.

On a surveillance recording that caught Graziano, he could be heard bragging about how much money the website was making him:

“If at the end of the year I can make two million and I gotta give away, like four or five hundred (thousand), that’s a million and a half, you know,” Graziano said. “My money.”